Some photos from my recent dive trip, taken by my friend Germaine who has an underwater case for her camera.

The blueprint of Seven Skies, the wreck we are diving at - 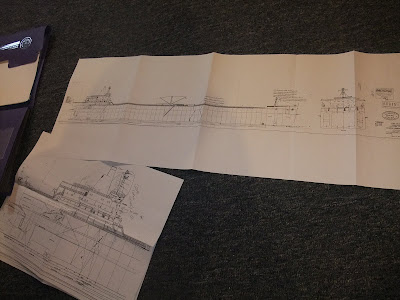 The descent on a descent line - a rather strong current was pulling me both away and up from the rope, making it quite a task to pull myself (that's me there) down - 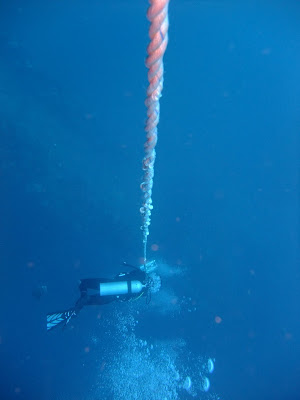 But how beautiful it was once we were down. We had fairly good visibility - 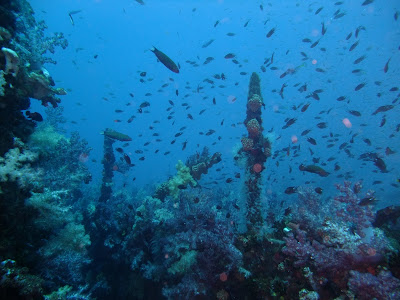 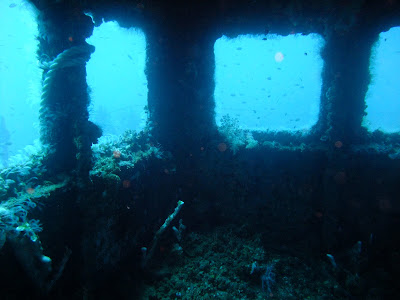 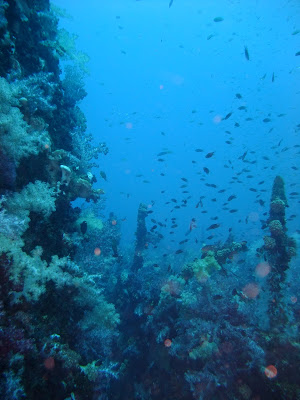 It's hard to get a sense of the size. The tanker sank upright, and where we were diving was the most shallow point, at about 35 metres. The deepest point is about 57-60 metres. We were diving a very small area of it - we're not allowed to go deeper into the wreck without the right gear and training.

This funnel looked to be about two storeys high, and there's a staircase inside. Pretty dark if you don't have a torch. The picture isn't very clear, but the coral life on it is intricate as cravings on a Gothic church. 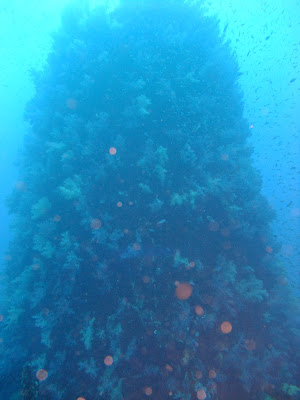 Some other interesting things we saw on other dives included some very funky, very psychedelic nudibranchs (sea slugs). Look at the purple and orange spiky one! It's by far one of the coolest I'd ever spotted on a dive. 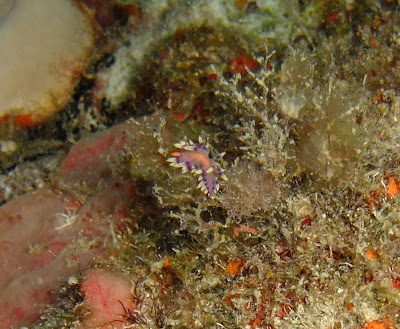 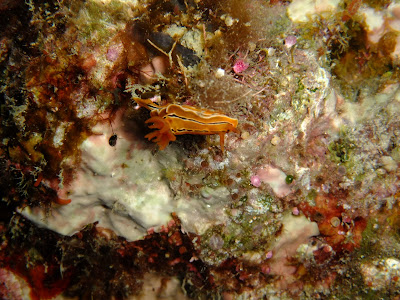 I used to find nudibranchs quite boring, but I've come to be quite fond of them (not quite a fanatic like some though) and the way they perch jewel-like on a reef, looking quite content and yet incredibly attention-grabbing at the same time.

I think these are sardines. They don't seem to mind divers, they swam so closely to us, like gleaming arrows - 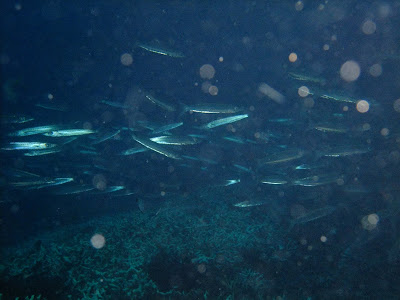 And my favourite find of the trip: behold Ivan the Terrible, the tiniest and yet fiercest squid to storm the seas - 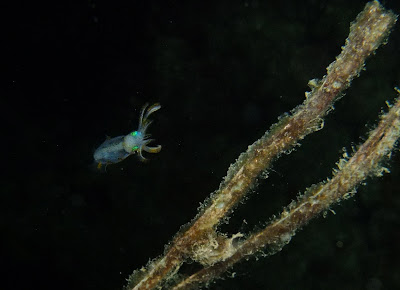 It's just a bit smaller than my little finger, but it was waving all its tentacles at us in what seemed like quite an aggressive manner, unafraid of us and our torches (it was a night dive). Ivan the Terrible is quite a good name for this angry, fearsome little squid.

So that was my weekend adventure - three days living on a boat and in the sea. Some of the dives were depressing - corals dying, bleached by the warming seas. A lot to think about.
Labels: diving inspired moments musings photography travel

Pret a Porter P said…
This is incredible! Sea life has the most amazing colors, it's fascinating.
6:12 PM

Ammu said…
Gorgeous pictures! By the way, I gave you an award - http://somecrazycliff.tumblr.com/

yanqin said…
Prêt á Porter P: I am constantly fascinated by the colours and life under water - I feel hypnotised underwater.

Ammu: Thanks so much for the award, I'm so gratified that I don't really know what to say! Credit for the pictures goes to my friend Germaine, who has inspired me to consider getting my own underwater casing for my camera...
4:34 PM