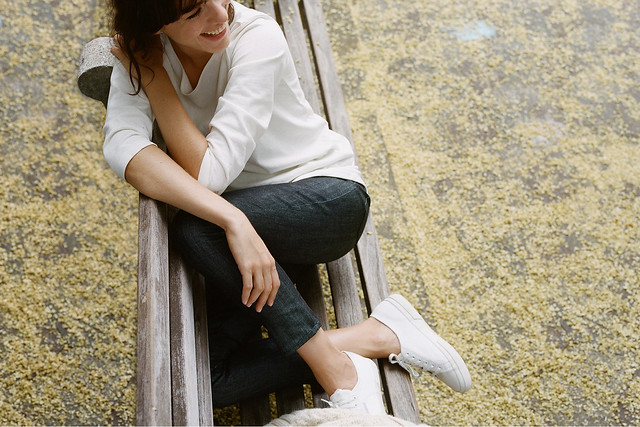 A few nights ago, I spent a fair bit of time window shopping online, and the following day, I spent a day out shopping where I relentlessly tried stuff. I bought nothing. I was feeling restless, style-wise, but I didn't actually want anything new. I was merely bored, and thankfully, impulse control prevailed.

One of the things I used to do was to collect images of inspiration, and post them on my Tumblr or here. I stopped doing that due to lack of time to read blogs and blog, but then I started wondering into shops more, often something trying stuff on just see how something looked on me. And this predictably, led to actual purchases.

At the end of the day, I'm drawn to simple pieces, usually based on classic shapes, and it's not impossible to update a wardrobe of such pieces to acknowledge the current - an unexpected shoe-pairing here, some layering there, taking up the hems of an old shirt or dress. Which means some of the things I buy don't end up getting much traction, because nice as they are, they never meant much to begin with. I could have done more with what I had.

So I started slowing down and lingering over fashion imagery I like again, in particular looking out for looks that remind me of things I already have, or pair similar pieces in unexpected ways. I started pulling out things I'd stopped wearing for a while and trying them on when I had the time - sometimes I think of new ways to wear them, sometimes they're fit differently from how I remembered. Even if there is nothing remarkable about an outfit - it doesn't take much imagine to put together a simple long-sleeved top, jeans and white trainers - I think seeing it done well on another person, beautifully photographed, is a nice reminder that gets me going: "Why am I over-thinking it when this works so well?"

The types of images I go for are ones featuring a style and colour palette similar to what I own, and I avoid things that I know have no place in my life: heels, formal clothing, winter-wear, to name a few. Yes, there is the chance that looking at such images prompts a craving to buy new things, but usually the urge passes.

"Shop your closet" has become a catchphrase, like "investment buys", but unlike the latter, I think it's immensely sensible, surprisingly fun and it actually saves you money. If you're at that stage of your life when you've spent at least a decade buying your own clothes, and you have a decent trove* of clothing to tap, you shouldn't let that go to waste.

*This is why I think decluttering is overrated. It's too easy to go overboard with the purging.
Labels: dressing musings

Sue said…
What a refreshing way to look at things. If you have a discernible style which you are happy with and it doesn't change much, things should naturally carry through sometimes there can be a slight difference in the cut of a trouser for instance. I love the whole concept of decluttering but find it very hard to do in real life. I find a reason for holding on to many things and more often than, they come back in to their own.
5:43 AM

Archana said…
I feel like decluttering became synonymous to throw everything out and keep 33 items or some arbitrary number like that. The images of spartan closets circulate and get pinned well.

That being said, the process should be done right. Does it fit properly? Does it make you feel great? Does it go with anything else in your closet, as in, can you make a complete outfit out of it, or does actually wearing it require investing in something else? Where do you plan on wearing it? And honest answers help.

I also hold on to some special items that I am currently bored of, but will come back into play after a year or two. My blue dresses for example. I have a stack of them and I cant possibly wear them all as often as needed. But its nice to go back to them from time to time.


I hear about these older women who say "oh, I have had this for 20 years" when complimented about their dress or a blouse. My mother falls into this category. She has the most impeccably contained and beautiful closet. And items keep for decades. I intend to be like them in the future. Have enough to not wear out your favourite pieces too soon.
6:21 AM

Pret a Porter P said…
Well said. I agree with Archana to, that it shouldn't be about having 33, or 50, or X number of clothing only. And I also like that I still wear things that I bought 11 years ago. Which makes me wonder how the heck am I buying 40 or 60 new things some years when I feel like I wear the same things over and over.
10:13 AM

koko // res pulchrae said…
I used to follow runway shows religiously. I knew I could never afford head-to-toe looks, but I mostly kept track of the way designers combined things - shapes, textures, patterns, colors - and I would try to keep those in mind when figuring out what to wear.

I haven't followed runway in years, mostly because there are just way too many shows and seasons now and it's become overwhelming, but I feel like I've been in a style rut so perhaps it's time to peek at some shows now. I even like the menswear shows, as the looks are more 'wearable' than women's.

I think my online curating has veered from purely outfit inspiration to a more general aesthetic, if that makes sense.

Ammu said…
I catalogued my entire closet a couple of weeks back - largely to make a list of items I was ready to give away to people who needed them more. But it turned out to be a more useful exercise than I anticipated, especially in terms of realising that the only things worth adding to my closet were new versions of items I wear to death. Knowing that I only own two skirts and don't wear either one often is a good reminder to never purchase another skirt again!
Life has been so complex in recent months that a simplified wardrobe has become a necessity and I have realised that I don't need to reinvent the wheel. Uniforms work and no matter how fabulous a $$$ pair of high heels look in a magazine or store, I will never wear them enough to make it worth the price. My beloved Varas in black and burgundy on the other hand work beautifully but the great thing is that these two pairs are enough, I don't need a third. My money can go to better places.

lin said…
Sue: Agree! I think it's one thing to throw out or give away something that's truly useless (too many holes, too faded, can't be repurposed into anythng useful) or out and out fashion missteps, but if I've shopped like a considered person for 10 years, usually what I have was purchased with some thought and are worth wearing again when the time feels right. Most times, shopping my closet knocks the urge to buy new things out of me.

Archana: The process is very useful! Just that I usually have to ask myself that for about 3 years before I arrive at an answer..

Pret a Porter P: I think I would shop a lot more if I didn't tidy up my closet and make sure I knew what's in it from time to time!

Joy: Oh dear, wine would be an even more expensive hobby!

koko: work has a way of taking over life! I get what you mean about general aesthetic vs pure outfit inspiration, i think it comes with really figuring out what you like.

Ammu: I agree about not having to reinvent the wheel. most times, trying out a new style usually turns out to be a passing whim for me and i always feel regret about the waste.

Unknown said…
Linen shirts for men India India were made of thick fabric, greatly frowned upon as the summer season prevailed. So, during the warm season, the need for a cooler alternative rose. Style was something that could not be compromised.
1:32 AM