I am writing this post after I climbed 120 floors, trying to get myself semi-ready for an attempt to reach the summit of Gunung Rinjani, a 3,726-m mountain on Lombok, Indonesia.

I committed to the trip without giving it much thought when I was in Italy, and it was only when I began doing research on the climb that I realised what I had signed myself up for. I know Rinjani isn't Everest, or even Everest Base Camp, but when you read something like fifteen blog posts and they all contain some variation of the refrain "it was the toughest thing I've ever done", you worry.

Hence, stair climbs, which I haven't done since I was an enthusiastic, 17-year-old member of my school outdoor activity club. I started with 72 floors (climbing a 24-storey block three times), then 96, and stayed at 96 till tonight, when I went for 120. At some point I hope to be doing 200 floors three times a week, with a pack, and mixing up the pace while I'm at it. This is on top of some light running or swimming, and my usual yoga sessions.

All the Rinjani research brought memories of the time I climbed Gunung Merapi in with my younger siser, in 2013. Like Rinjani, Merapi is also a volcano - Indonesia's most active volcano or second most active, depending on your source. It last blew its top off in 2010, but still measures a nice 2,900-odd metres above sea level. Because of the volcanic activity, the terrain is especially tough-going near the summit - loose sand and gravel that you sink into and slide back. It's literally two steps forward one step back.

Hitting the slopes of Merapi was not my idea - it was my rather ambitious younger sister who insisted I couldn't possibly resist the idea of climbing an active volcano. Ironically, she spent most of the trekking wheezing and asking if we could turn back. I said no (while also wheezing).

The climb starts innocuously enough. Either your trekking agency picks you up and drives you to the village of Selo, or you figure out your own transport there. Most people start at about 1am, with the aim of reaching the summit in time to catch the sunrise, and then coming back down and perhaps make it back to your hotel in time to catch the last of the buffet breakfast.

From Selo, you start on a steep, asphalt road, and it makes you feel a tad silly. Isn't it supposed to be a mountain? But this ends after a few hundred metres, when you reach New Selo, and get yourself registered. And you're off.

I didn't take any pictures because I am terrible at taking pictures at night, but it was your basic star-strewn night sky, though not quite clear enough to navigate by moonlight. I used a headlamp, which is essential for night climbs of any kind. You'll need your hands, when the going gets steep.

And yes it's a steep climb (like taking two or three steps at a time on a flight of stairs), punctuated by some flat-ish narrow ridges. There are also three plateaus before the summit, on which you can declare "enough!", make yourself comfortable and catch the sunrise.

I didn't have much faith in my fitness at the time (I was only doing yoga, and not even as regularly as I would like) and would have been happy make it to the third and highest plateau, Pasar Bubrah. But when I got there, and was told it the summit was just 300m above me, it seemed silly to stop. 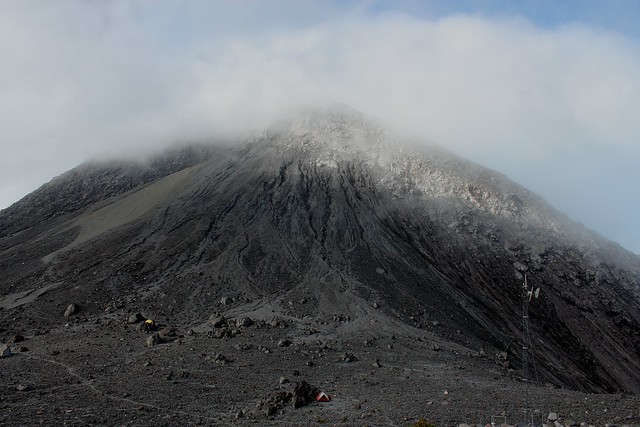 Pasar Bubrah (above) was kind of fantastic, like being on the moon. The cloud cover is a rather disorienting though. The summit is often shrouded in cloud, and it surprised me, how quickly conditions change. One minute it's bright blue sky, the jagged rim of the peak in sharp relief. And next minute you're in a fog that seemed to muffle even sound.

Well off I went, leaving my younger sister behind, after the guide suggested she was better off resting instead of over-exerting herself and risking injury. His faith in me was slightly misplaced, because the hellish last leg spent ploughing through loose rock and sliding backwards took me so long, the sun was rising before I reached the summit.

I stopped, mid-sink, for a look. 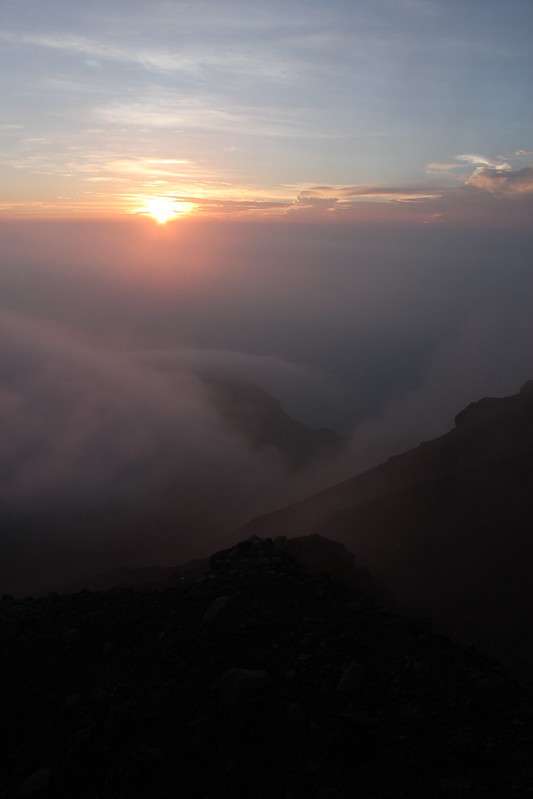 And when I looked the other way, I saw this (That's Gunung Merbabu) - 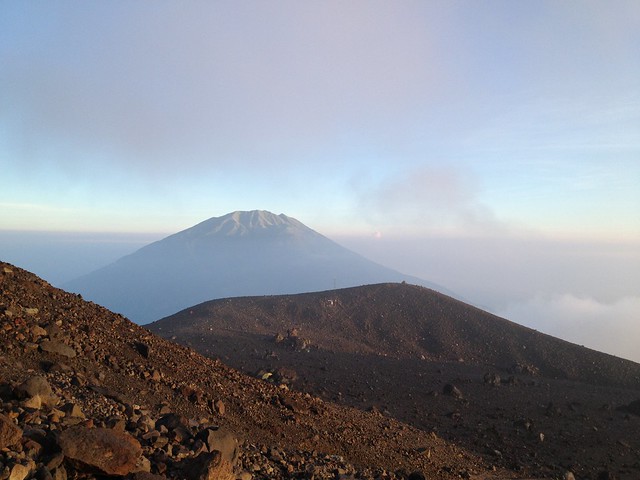 The summit of Merapi is not picturesque - it is a ruin of loose, broken rock. Unlike the sweeping beauty of the summit of, say Mount Kinabalu in Malaysia, the peak of Merapi tips into a crater, which is basically a scary, smoking pit below you. It's a bit like Mordor, as shot by Peter Jackson. 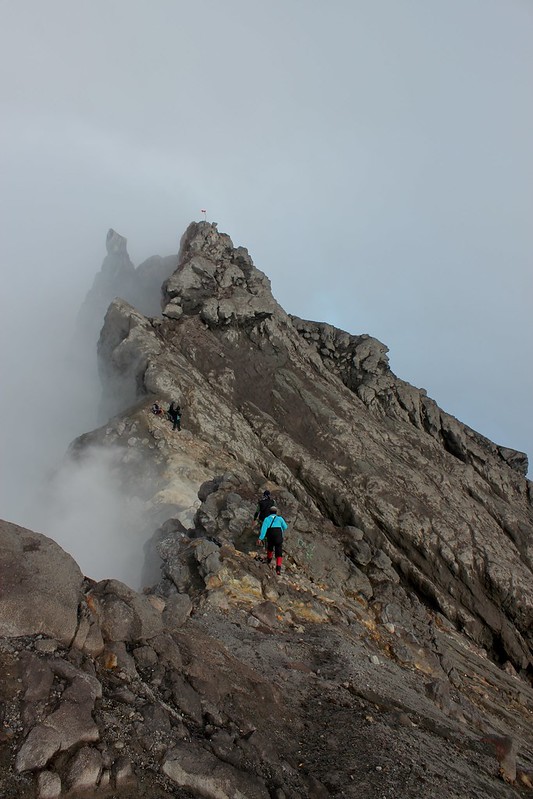 And I felt quite thrown off by the cloud cover. One minute, the views of the surrounding volcanoes are clear and gorgeous. Then the clouds roll in without warning, and suddenly the landscape below you vanishes.

Another glimpse of Merbabu - (After this I lost my nerve to take photos because scrambling on the rocky ridge was quite challenging for me. Sadly, the views were better on the other side.)

A glimpse of the valleys below, carved from rivers of lava flow in previous eruptions. Again, when the clouds roll in, you feel slightly claustrophobic, because it cuts off your vision, almost like it's pressing down - I sat down on the edge of the crater, and looked down. If you're lucky and get there on a clear day, you can see the lava dome that's forming, glowering, fiery and orange in a grim grey rocky crater. Or so I was told. When I looked down, I saw, well, steam. 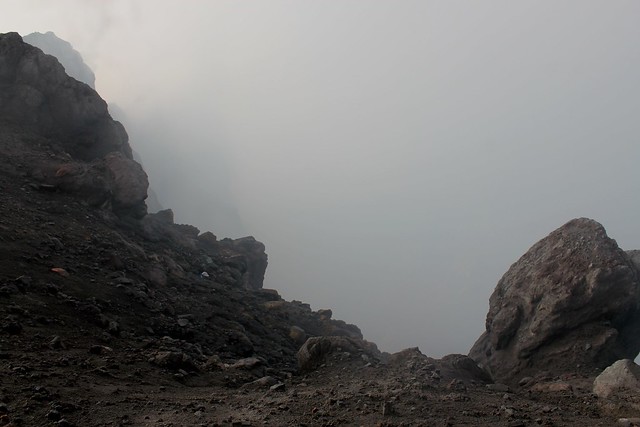 This is the way I came up, practically crawling - And then I had to go down. The memory of it makes my butt ache.

The view, from Pasar Bubrah. Pity it wasn't a clearer day, I've seen pictures of way more spectacular views than this (there are lots of volcanoes in the area). You can also see the deep grooves left by lava flows in the greenery below - I don't have any photos of the descent beyond this point because I was pretty tired and the way down is not easy - broken rock in steep piles. The way up at night is chilly, but by mid morning, the sun gets pretty fierce and there isn't much shade along the way. A hat and sun block are advisable.

Once we saw this sign, we knew we were home free. They call this spot "Hollywood". I sat down and had very very cold Coca Cola. And burped loudly. Classy.

The land around Merapi is intensely farmed, the slopes tightly terraced and planted with all manner of things: rice, jackfruit, dragonfruit, bananas, papayas, sweet potato. Despite the threat of eruption from a rather active volcano, I guess Merapi's fertile slopes are still worth the risk. And that was as much as I could take in, before I slept like the dead for the rest of the ride back to my hotel.

A reasonably fit person can do the ascent in about 3 to 4 hours, a less fit being like me took about 4.5 hours. The descent also takes longer than you might expect if you aren't fit, because you're more tired by now and you have to take it slower or risk twisting an ankle (or worse) on uneven terrain. Since I didn't train for this and I was at a rather stationary period of my life (yoga twice a week at most), I think Merapi, despite its angry, frequent eruptions, is pretty accessible and just challenging enough to give you that sense of accomplishment. Definitely worth a visit if you visit this part of Indonesia.

I expect Rinjani to be much tougher. But it was also the idea of doing something that scares me a little that made me decide to go on the trip.

And let's face it, my right knee is likely to make it impossible for me to try something like this at some point in the near future, so I might as well make a go of it while I can.
Labels: travel yogyakarta

Shutterbug K said…
This is so exciting! I hope your knees hold steady for Rinjani. Cheering you on from California :)
4:12 AM

koko // res pulchrae said…
This is incredibly inspiring and your photographs from the summit are breathtaking! Never been much of a climber, the only time I've been on top of a mountain is if I got there via ski lift, lol. Much respect to climbers though. I find it so rewarding to push my body to its limits, at the moment I've been running half marathon distances pretty regularly and although the last couple of miles are difficult the sense of accomplishment is so satisfying. I can see why pro athletes get addicted to the exercise high!
4:22 AM

Archana said…
Just in time for my climb(s).

Esply walking on the moon like mountain. I need to find myself a mountain like that to climb.

Anonymous said…
This comment has been removed by a blog administrator.
6:40 PM

Anonymous said…
This comment has been removed by a blog administrator.
6:42 PM