those other times are running elsewhere

Shortly before midnight last Friday, my watch stopped. Not stopped exactly; the second hand trembled as it tried to move, succeeding in short bursts before giving shortly before Saturday, just minutes short of my birthday. So I get to be 25 forever.

Without a watch, I feel disoriented, unmoored. Checking the time on my mobile phone is a hassle. I could gauge time by the position of the sun in the sky, but the rainy weather (unseasonable, bizarre) thwarts me. It was the first time I was without a wristwatch in years, and I suddenly felt appreciative of all its useful qualities - handy, easy to use, functional, and even decorative.

On Sunday, I decided I had lasted long enough without one. Since I wasn't in the market for the kind of thing they call a horological instrument (i.e. expensive), I decided go basic, and went to a Casio retailer, because the Casio calculator watch I regularly swipe from my sister is ancient, trusty and virtually indestructible. 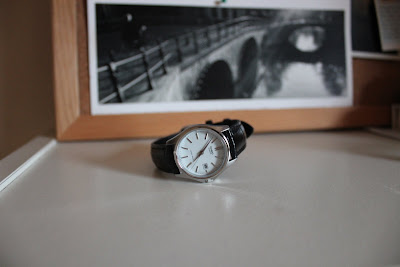 It looks just like my last watch, but way less expensive, and the face has that mid-century whiff about it. I was thrilled.

Just hours later, I am presented with this birthday present from my friends, who hadn't actually known my watch had broken down, they just got tired of how scratched the face was. 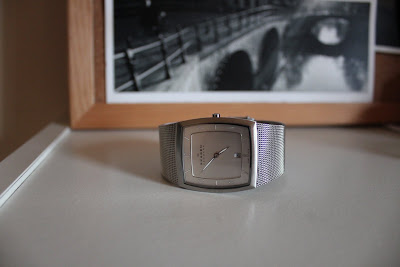 It's not something I would have chosen for myself - I prefer leather straps to bracelet straps, and the face is also larger than what I had in mind. It's beautifully lightweight and feels more like a piece of jewellery, and while I still prefer the look of the Casio, but I like this watch for the subtle way it changes the mood of my outfit (to my eyes anyway) but in a subtle way. The magpie in me also thrills to the gleam of the mesh bracelet. It's actually interesting being given something I didn't know I would like; it opens the confines of what I think my tastes are.

I've always believed in having only one watch at a time, because a drawer full of ticking watches just seems...forlorn and wasteful. Now I have two, and I'm not sure what to do. I've been wearing the silver for the past two days, and I like it, and I now wished I hadn't moved so quickly in buying the black; I would have been content with just the silver. Maybe I'll rotate them on a weekly basis.

But I love my friends' unnervingly accurate instinct for getting what I need right, and choosing something I actually want to wear. This is not the case for some of the other gifts I received in the past...
Labels: birthday musings shopping adventures watches

Pret a Porter P said…
I like both watches you ended up with. I like how thin skagen watches are. It seems are birthdays are a day apart ;)
8:43 PM

Pret a Porter P said…
This comment has been removed by the author.
8:44 PM

Pret a Porter P said…
This comment has been removed by the author.
8:44 PM

yanqin said…
Are they?! I hope you had a good one too. Though I find that the more of them I have, the less thought I give to them...
9:41 PM